The Year 3s from both Mr Baldock and Miss Verrusio’s classes recently went on a camp to Woodhouse. It was a one night two day camp. We stayed in the ‘Bunkhouse’. We had two great camp leaders in Marc and Michelle from Wilderness Escape who organised and ran the activities for us while on camp. We also had some great parent helpers in Donna, Jacqui, Sue, and Tanya.

This was the year 3s first experience of a school camp and for some their first camp experience. Please find below some photos and slide shows of some of the activities the student’s took part in.

After taking all our gear off the bus we had recess. Straight after that Marc and Michelle introduced themselves and went through the rules while we were on camp. After that the students participated in a few warm up games (pictured below). 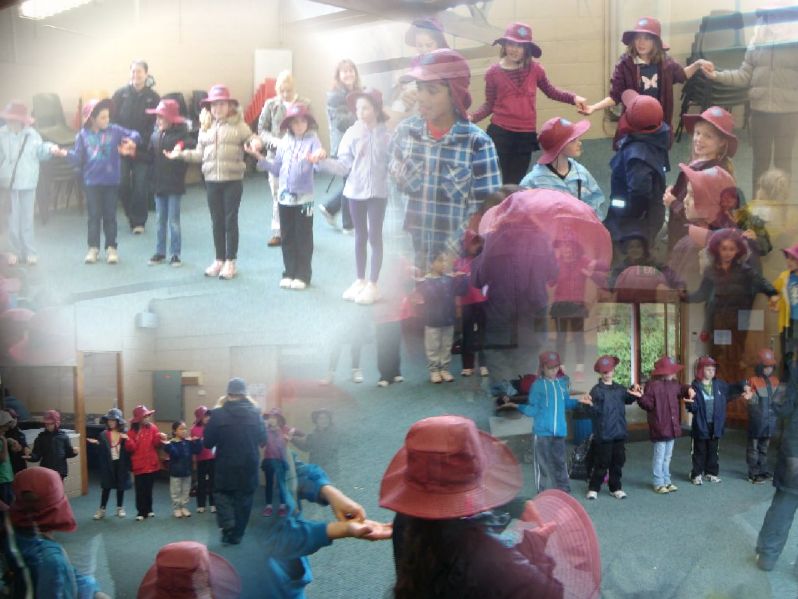 Our first activity was billy cart construction and racing. Due to the rain Marc had organised for us to construct our billy carts under cover. Marc demonstrated to the students what the procedure was to construct the Billy Carts. He taught the students the correct names for each of the parts. Then the students were arranged into groups, to construct their billy carts. After the carts were constructed and they passed the inspection by Marc they were ready to race. Each team had to assemble on the track next to a tyre. After each lap, each team had to pit stop and change their role in the team. After each team had completed their laps they had to stand in a line quietly to be in the running to win. Below is a slide show of all the action.

For our second activity we had to go to the Pine Forest to meet up with Michelle. Michelle showed us how to make a spider web rope bridge between three close trees. After Michelle’s demonstration we divided into groups and then set about constructing our own rope bridges. We were given a time limit and a pretend scenario that a flood was coming and this was one way to save ourselves. Below is a slide show of our rope bridges.

We went on a nature treasure hunt with Michelle. We divided into teams and we then had to set about finding the items on our lists. It was great fun. Below is just a few photos of our treasure hunt.

The students had a great time presenting their talents at our talent night. Our parent judges did a fantastic job at coming up with great comments and feedback for our performers. Congratulations to Piper and Bernie for coming first with their dance routine, Sophie and Georgia for coming second with their comedy routine and Caitlin for coming in third place with her dance routine. Photos of this event will be coming soon.

On the second day Marc showed us how to make damper. We could include all sorts of extra ingredients in our damper such as chocolate, sultanas and marshmallows. Some of the students chose to make their damper and cover it in alfoil, while others chose to roll the damper around a stick. Once the students had completed this it was time to cook it in the camp fire. Marc instructed us on how to cook safely on a camp fire. When it was ready the students were really pleased with the results. Below is a slide show of our cooking efforts.

Our next activity was going on an environmental water study with Michelle. She gave us a very informative talk about the local creek environment. We then were given the opportunity to explore the creek with nets and buckets to see what water creatures we could find. Some of us almost ended up as water creatures! Below is a slideshow of our water explorations.

Our last activity was to take on Challenge Hill. Due to all the rain we were restricted as to what equipment we could have a go on, but we had a lot of fun anyway. Below is a slide show of a few photos. There will be more to come soon.

I would like to say a big thank you to Marc and Michelle from Wilderness Escape for running such a fantastic camp for us. I would also like to thank our parent helpers Donna, Jacqui, Sue, and Tanya for all their help and support and a thank you to Miss Verrusio for all her efforts while on camp. Both Miss Verrusio and I were very happy with the efforts of the students. It was great to see them working so cooperatively together while experiencing new activities and having a lot of fun.

Year 3s what was your favourite memory from camp? Leave a comment.